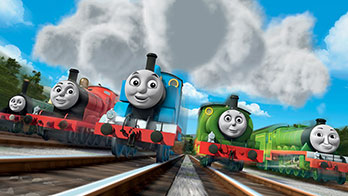 Just when you thought the current Southern Rail dispute couldn’t get any worse, The Brighton Bulletin can exclusively reveal leaked documents have shown Southern Rails chiefs are in advanced talks with the Fat Controller about purchasing a fleet of ‘train only’ trains.

Southern Rail are digging their heels in over the introduction of ‘driver only’ trains and seem hell bent of pissing the general public off even more with this new idea. The leaked memo’s show that Southern Rail Chiefs have already met The Fat Controller on more than 3 occasions to discuss to purchase of up to 30 of his fleet. The trains will drive themselves, do their own announcements and the doors will be opened by the trains themselves making almost everyone’s job within Southern Rail completely obsolete although bosses have assured staff that no jobs will be lost.

If they are successful in their plan passengers could be riding Thomas, Percy, Toby, Arthur and the newly introduced politically correct mobile, Ashima, as early as next month. We caught up with commuters to gage their thoughts on the proposal, John Pevril who travels from Brighton to London daily said, ‘As long as it gets me to work on time I couldn’t give a sh*t. Ridding a pig naked would be better than the non service I am getting at the moment so if it gets me to work I have no complaints’. However many think that the proposal will only serve to prolong the current strike action, Anne Everett from Hove expressed her concern saying, ‘for f*ck sake’.

More news on the plans at it reaches us here at Bulletin HQ.